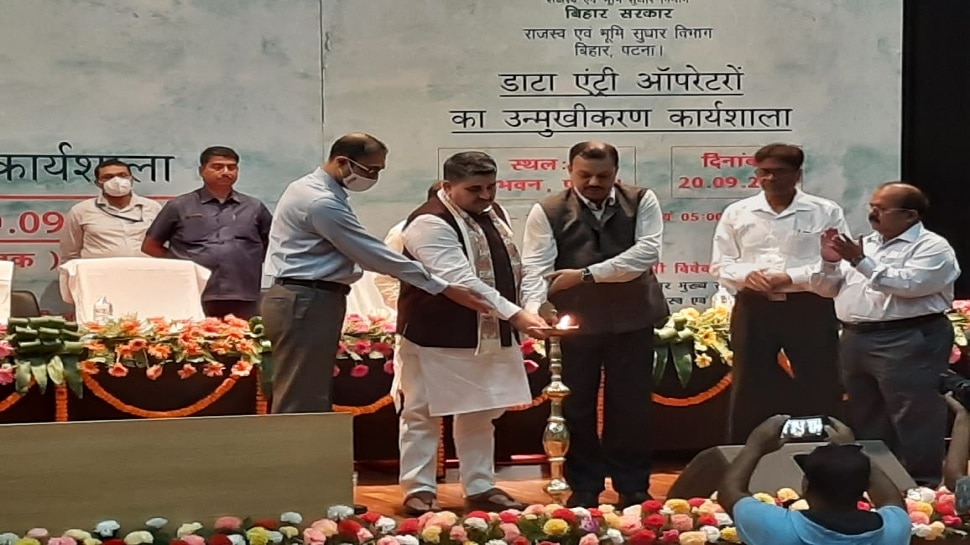 Patna: Corruption has been a major problem in the land and revenue department. The ministerial officers of the department are busy in fixing the system. The pain of ministerial officers has also been seen from time to time from many forums. A similar picture was seen in Patna on Monday, when on the occasion of the training workshop of Data Entry Operators, the minister had to take the help of Hanuman Chalisa’s chaupai to teach the lesson of honesty.

However, to boost the morale of the operators, the minister also offered the desired posting on the basis of work. Actually, the occasion was for the workshop for the training of 534 data entry operators and the minister of the department, Ram Surat Rai, was also in full swing. The ministers engaged in removing the corruption spread in the department are also taking care that the new employees do not get mites of corruption.

read this also-Tejashwi Yadav engaged in strengthening RJD in Jharkhand, said: Those who water the party with blood and sweat will get respect

‘The disease will start taking home in the body.
Minister Ramsurat Rai said, ‘Honesty is the best policy’. There is definitely some trouble in this. But with time the problem also goes away by itself. But when people go on the wrong path, it feels good in the beginning. You have a lot of wealth but you will not sleep at night. The disease starts making its home in your body. At the time of death, people also start chanting, ‘Bhoot vampires do not come near’. Similarly, the surveillance and ED departments will go after you. So work honestly.

read this also-VIP ready for UP assembly elections, Mukesh Sahni will start campaigning in Agra next month

Offer of desired posting
The minister said in a stern tone to the new data entry operator, ‘You have just joined. Do not lobby any leader-MLA for the posting you want. First you do good work, name it and then based on your performance, I will do your desired posting. Rai also announced to give Parker Company’s pen and pendrive to 11 selected operators to encourage data entry operators.

Singh said that identify the wrongdoers and train the new ones in a better way so that they do not fall into the wrong stream like the old ones.

Gwalior 74 years old lady happy after get first jab of vaccine dvmp | Due to lack of mobile, the elderly woman wandered for the vaccine, if she was vaccinated, there was no place for happiness

milk bath benefits know health benefits of mixing one cup milk in bathing water samp | Milk Bath: Mix 1 bowl of milk in bath water, you will be surprised to see this benefit

Gang rape revenge rewa brothers raped sister of accused in mp police investigation crime latest news | Sister’s rape was avenged with ‘gang rape’, what is the truth of this serious allegation against 2 brothers?