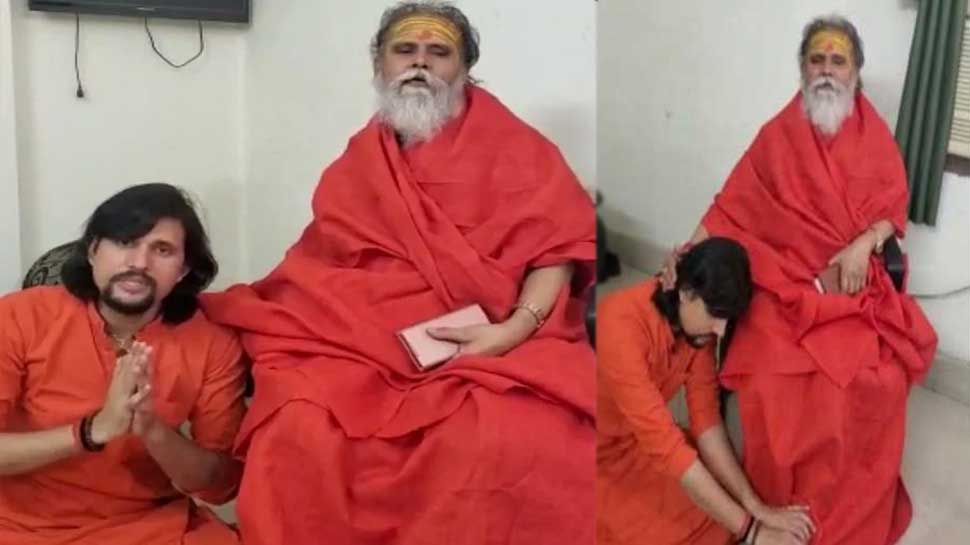 Prayagraj: Police can also call Additional SP Om Prakash Pandey and SP leader and former Minister of State Indu Prakash Mishra, who played an important role in negotiating the agreement between Mahant Narendra Giri and his disciple Anand Giri, President of Akhil Bharatiya Akhara Parishad. The eight-page suicide note recovered from the room of Mahant Narendra Giri mentions his disciple Anand Giri. Apart from this, the chief priest of Bade Hanuman temple at Triveni Sangam, Aadya Tiwari and her son Sandeep Tiwari have also been accused of abetment to suicide.

The video of the agreement between the teacher and the disciple is also present at the officer’s house.
The dispute that lasted for several days between Mahant Narendra Giri, President of Akhil Bharatiya Akhara Parishad and his disciple Yoga Guru Swami Anand Giri, was resolved. The IPS officer had made an agreement between the Guru and the disciple at his Lucknow residence. Anand Giri apologized by holding the feet of his guru Narendra Giri and a video of this was also prepared. Along with this, Narendra Giri had also released a video of apology to disciple Anand, in which he was saying that there is no bar on his visit to the Bade Hanuman temple and the Baghambari Math.

CM Yogi paid tribute to Mahant Narendra Giri, said – his death will not remain suspicious, the truth will come out

Can interrogate police officer, SP and BJP leader
It is said that during the settlement at the house of IPS officer OP Pandey, two other people along with the guru-disciple, BJP leader Sushil Mishra, SP leader and former minister of state Indu Prakash Mishra were also present. Now the police can interrogate these three. At the Lucknow residence of the officer disciple, Yoga Guru Swami Anand Giri had apologized for his actions and words, withdrawing the allegations, statements made against Mahant Narendra Giri.

Anand Giri was furious after his expulsion from Shri Niranjani Akhara
Swami Anand Giri returned to the Gujarati ashram in Haridwar after the end of the dispute, while Mahant Narendra Giri returned to the Baghambri Gaddi, the Math of Prayagraj. Apart from his guru, Swami Anand Giri had also apologized to Panch Parmeshwar of Niranjani Akhara. After the expulsion of Anand from the Panchayati Akhara Shri Niranjani on 14 May, the dispute between the Guru and the disciple escalated. Action was taken against Anand Giri in connection with the family and misappropriation of money of the monastery-temple. After being expelled from the akhada and the monastery, the temple, Anand Giri was continuously giving statements on social media against his guru Mahant Narendra Giri.